If you want to see , experience and feel what the future of Music will be like then you need to play a few songs by Japanese Theatrical Band, The End of the World.

SEKAI NO OWARI (or End of the World) played to a sell out crowd at the Hollywood Roxy the other night and I was fortunate enough to be invited.
Prior to the show I had listened to a few songs by End of the World and even had done a few features on Coming Up, but nothing would have prepared me for what turned out to be one of the most amazing shows I have been to all year.

This was the first show in the USA for SEKAI NO OWARI and no one knew what to expect since most of their songs are in Japanese and tailored around a Japanese audience. But what transpired was a beautiful presentation of some of their, in my opinion, best tracks including Anti-Hero, Mr. Heartache, Death Disco and my personal favorite Dragon Night. 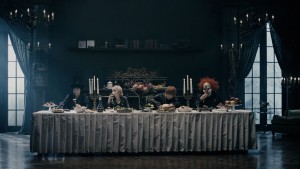 In all the band played nine of their songs and were somehow able to capture the unique nuances of their recorded music that demonstrated just how truly talented this up and coming band really is.

Sure their English was not the best but that for me added to the uniqueness. To actually hear them sing their songs in English was beautiful as their attempt to communicate with audience in their broken English moved them from a highly produced performance act to humble artist who wanted nothing more than to connect with their audience and demonstrate their personal warmth and love for music and their fans.

Technically the band played flawlessly. The core band members were flanked by two additional members – one playing drums and the other playing electric and stand-up bass . These two additional musicians were wearing tapir masks – or even possibly alien head costumes which immediately made the show other worldly from the moment they took to the stage.

In all it was a fantastically rich show and I am so moved by the bands desire to broaden their fan base to include America. They may likely be the first J-Pop band that succeeds in the US and I would not be surprised if the next time they are here they are playing to sell out crowds at the Staple center or other larger arenas. They are that good.

Thank you SEKAI NO OWARI. Your music is spiritual and big enough to touch the world in ways perhaps you never expected.