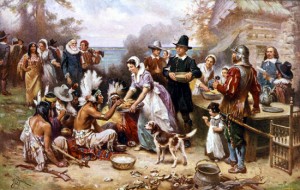 After the Pilgrims arrived in Plymouth in 1620 on the Mayflower,they almost starved to death. Members of a local tribe, the Wampanoag, helped the newcomers, showing them how to plant corn and other local foods. In the fall of 1621 the Pilgrims celebrated their first successful harvest with a three-day feast with the Wampanoag.

The friendliness of the Wampanoag was extraordinary, because they had recently been ravaged by diseases caught from previous European explorers. Europeans had also killed, kidnapped and enslaved Native Americans in the region. The Plymouth settlers, during their desperate first year, had even stolen grain and other goods from the Wampanoag, according to Wikipedia’s entry on Plymouth Colony.

The good vibes of that 1621 feast soon dissipated. As more English settlers arrived in New England, they seized more and more land from the Wampanoag and other tribes, who eventually resisted with violence—in vain. We all know how this story ended. “The Indian population of 10 million that lived north of Mexico when Columbus came would ultimately be reduced to less than a million,”.

Let us all be thankful that the Native Americans did not kill our forfathers the minute they stepped off their boats and that the Wampanoag Indians where here to help us through our very first winter in the new world.