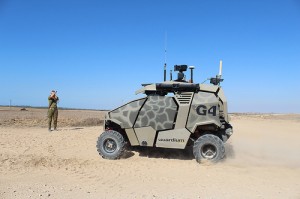 It does not take you too long to figure out the many uses for this cool new remote control military vehicle. Riot control, border patrol, parking lot monitoring, school sentry, the potential uses for these smart cars on steroids is endless.

The Guardium is an unmanned armored car that carries more than 660-pounds of cameras, electronic sensors and weapons, according to the Israel Defense Forces’ blog. The killer go-kart can be operated in real time by a driver sitting in distant command center — similar to the way armed drones are flown by far-off pilots — or they can be programmed to “run patrol on predetermined routes without human intervention,”.

The Guardium is fully operational, according to the IDF.

Unlike the Army’s robot jeeps, which are pretty much serving as pack mules that accompany infantry units, the Guardiums are being used in a similar manner as UAVs, running patrols by themselves and using their sensors, equipped with “auto-target acquisition, to look for the enemy and their weapons and…well, we’ll see. The IDF says the little robo-cars can use various forceful methods to eliminate threats.

I say we use these futuristic robot cars to patrol the beaches.  Who knows, maybe they can offer paid subscriptions to view  live video feeds to help offset the cost?